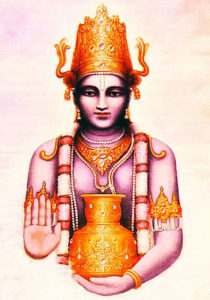 One can find many stories in old Indian literature about Dhanwantree. The name Dhanwantaree is not mentioned in four vedas. One can come across the name in the compendias like puranas, Ramayana, Mahabharat. It is described in Ramayana & Mahabharat that Dhanwantaree surfaced after churning of ksheerSagar (milk ocean). He was expert in Ayurveda. Dhanwantaree first appeared in white out-fit with nectar pot – Amrut Kumbha in one hand. Dhanwantaree was the first to bring necter/Amrut on this immortal
world. Then Shri Vishnu requested, invited Devas (gods) and Danavas to have a lunch. But Shri Vishnu served Amrut to Devas only.

Other products appeared after ocean churning and distributered, ascribed to different Devas e.g. Dhanwantaree was alotted to sun (Bhaskar) both well expert knowledgeble in Ayurveda. Dhanwantaree became the desciple of sun. Later on Shri Dhanwantaree became first god of three Lokas (words). Afterwards it is belived that Dhanwantaree is incarnation (Avatar) of Shri Vishnu and worshiped

Other story one can read in puranas e.g. Skanda, Garud, Markandeya. Once upon a time Galav sage (Rushi) was travelling. During travel he became thirsty and was in need of water. Galav saw a beautiful girl known as Veerbhadraa walking with a water pot. She was vaishya (Vanijya) by birth. Sage requested her to have some water for drinking. Veerbhadra offered him water with flashing smile. Galav and veerbhadra married in due course of time. She gave birth to a male child their only son. The child was expert in many vidyas/shastras (Sciences) since childhood. Son of Veerbhadra completed study of Ayurveda with Ashwini Kumar, the twin physician and surgeon of devas, gods. Afterwards he become famous with the name of Dhanwantaree. Dhanwantaree married with daughter of Ashwinikumar. Then Dhanwantaree became leader of group of vaidyas. This is the starting point of vaidya parampara – The tradition.

We come accross following information in the sushrut samhita. King of Kashi Desha (Varanashi) known as Divodas. He was teacher/Guru of Sushrut. Divodas declared himself as ‘Aadideva Dhanwantaree. He was incaranation/Avatar of Shri Dhanwantree. He propogated Ayurveda at his best. He used and taught surgery/ShalyaShalakya in his daily practice. Gave releif from diseases with surgery was his branch, line of treatment, this was well propagated in the society. People who were treated with surgery was known as
Dhanwantaree Sampraday. The tradition. Emperor chandragupta the second Vikramaditya has a Rajvaidya by name Dhanwantaree in his court. It was in fifth century A.D.According to Author Bhavmishra Aadideva Dhanwantaree was incarnation of Shri Vishnu. Dhanwantaree took birth/avatara as Raja Divodas of Aim of this Avatar was propagation of Ayurveda. After many centuries the title of Dhanwantaree was awarded to best Ayurveda physicain. Many aspects were scrutiuised before crowning the title of Dhanwantaree.

Following books are in the name of Dhanwantaree :

Shree Dhanwantaree is with two hands. In left hand he holds nectar pot and with right hand he is blessing. Such statue, Sculpture, portrait, pictures, photo one can see at many places. Shree Dhanwantaree is a perfect symbol of total health. It is recognised as god of wellness. He is worshiped on 13th day of Ashwin Vadya before Deepawali every year. At some places people, associations, organises lectures, some people observes festivals. We are teaching Ayurveda in marathi & English for more than five decades. Information of
Dhanwantaree narated and circulated everywhere. When I was in school, I read about Dhanwantaree from the books by Pt. Satavalekar in marathi also from Kalyan magazine in Hindi language. When I admitted to Ayurveda college of Pune University I learned about Dhanwantaree in Sanskrut language. I saw few pictures of Dhanwantaree. When I was working as news correspondent in 1958. I first saw Dhanwantaree Statue at the entrance of Armed Forces Medical college at Pune. We could see Dhanwantaree with two hands in 1961 when new building of Tilak Ayurveda College, Pune were constructed. When we friends started our clinics we performed pooja of Dhanwantaree picture published by Dhootpapeshwar company of Mumbai. In 1983 at the time of publication of Marathi Charak Samhita, Sagar prepared a picture of Dhanwantaree with the help of an artist and distributed every where, all over the world. The Dhanwantaree pictures presentated to each Ayurveda book by P. H. Kulkarni upto 2010. Also distributed at the time of forty International Ayurveda conferences. Clay and metal statues where distributed every occasion by National Integrated Medical Association from 1974 to 1983. Later on by Institute of Indian Medicine and from 1995 on behalf of Ayurveda Academy. Clay statues made available from Pune, Pen & Kolhapur from Maharashtra state.
We presented Danwantaree statue to each & every Ayurveda centre across the world. Dhanwantaree stawan is generally sung at the begining of any function and at International Conferencses. In Kulkarni family it was sung by Mrs. Vibhavaree, Sagar, Rohit, Vedang, Atharva from 1983 to 2010. Audio recordings of Vibhavari, Sagar & Rohit were provided to all centres for their routine use, especially at the begining of lectures, courses, seminars etc. In Italy at one old Church Dhanwantaree is being played along with Gayatri Mantra for many years from 1999. Dhanwantaree pictures stresses the importance of use of plant Kingdom, counch etc. from sea, amrut & in some cases by using surgical interventation. On hearing prayer of Dhanwantree every cell of the body receives the health message. Group of cells work better for longer period. Ultimately person becomes more healthy & lives longer. (Deerghayu). This message of Dhanwantree transcends to new generation of cells and chain remain unbroken. The un-interupted light of health remains on this earth forever and every person be happy & healthy everyday.